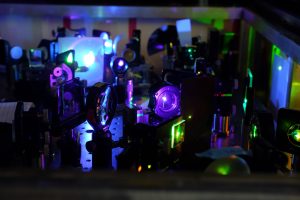 In this research theme, we aim to: (i) characterize, experimentally and theoretically, coherent phenomena that control production, migration, and delivery of excitons, polarons, trions, and spins; (ii) elucidate designs and environment factors that direct coherent, lossless flow of energy through the nanostructures; (iii) pioneer, using theory and experiment, novel strategies that exploit coherence effects to enable driving the simultaneous delivery of two charges following the absorption of a single photon. 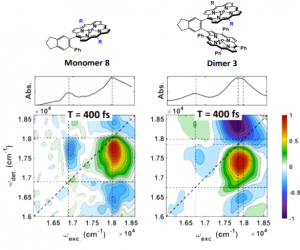 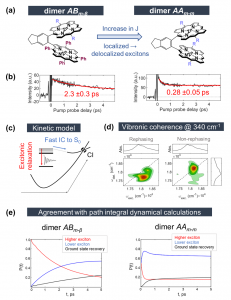 Strongly coupled arrays of chromophores offer the possibility to direct coherent charge or exciton flow over large distances, guided by Center theoretical developments. Makri’s real-time path integral simulations of exciton-vibration densities in large molecular aggregates containing up to 25 chromophore units, each with 28 vibrational modes per molecule, highlighted the distinct roles of individual and collective vibrations in long-range exciton transfer. These calculations offered the first fully quantum mechanical results on such large systems, illustrating the capabilities of available methods. Well-defined compositions of matter allow for the systematic study of the impact of symmetry breaking on vibronic coherence. Fleming has exploited 2DES and 2DEV spectroscopies and well-defined multi-porphyrin compositions developed by Therien to examine the influence of symmetry breaking on excitonic-vibronic coherence. Key questions that motivate these studies include: (i) What vibronic coherences trace their genesis from the interaction of nearly degenerate transitions? (ii) How does electronic asymmetry impact these coherences? (iii) How may augmented chromophore-chromophore electronic coupling serve to preserve excitonic coherence over longer time domains? Fig. 1 displays exemplary data for cofacially linked zinc porphyrin dimers ABm-β and AAm‑m that demonstrate how modest changes in electronic coupling can be used to steer exciton dynamics and delocalization and drive electronic and vibrational coherences. Detuning electronic coupling from weak (ABm-β) to modest (AAm‑m) reveals that the inter-exciton relaxation is accelerated by an order of magnitude, and provides clear evidence for competition between inter-exciton relaxation and internal conversion channels that depends intimately upon structure. Fig. 1 data show that significant manipulation of excitonic dynamics and the timescales of energy flow can be achieved by small changes in molecular topology: AAm‑m excitons are delocalized whereas those in ABm‑β are local. TDDFT analysis (Beratan) illuminates the origins of these disparate AAm‑m and ABm‑β electronic couplings. In AAm‑m, 2DES data evidence a vibronic coherence that is absent in ABm‑β. Theoretical studies (Beratan, Makri) explore how inter-chromophore interactions in cofacial motifs and system-bath interactions influence excitonic delocalization and quantum dynamics; in these studies, Makri’s path integral calculations are used to investigate the coherence of excitation energy transfer, capturing all key features of the pump-probe experiments and confirming the vibronic nature of the coherence. These benchmark molecular design, 2DES, 2DEV, and theoretical studies provide a basis for detailed investigation of larger porphyrin multimers and aggregates that explore the limits of coherence-enabled energy transport.

The Therien group has demonstrated that it is possible to modulate the band gaps of single-walled carbon nanotubes (SWNTs) by exploiting chiral, ionic semiconducting polymers that helically wrap the nanotube surface in a single chain fashion at constant morphology and rigorously fixed chirality. Fleming is executing 2DEV experiments to illuminate how the combination of polymer-SWNT electronic mixing and SWNT symmetry breaking drives electronic-vibrational coherence in SWNT exciton states and is correlated with the nature of coherent exciton motion. 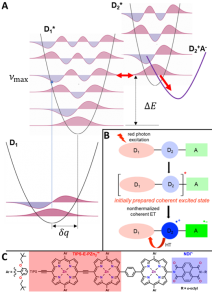 Ratcheting with coherence: moving beyond Boltzmann.

Therien designed a molecular system (Fig. 2) in which direct excitation of a long-wavelength absorbing D1 chromophore produces a coherent 1[D1-D2]* electronically excited state. This system leverages resonant energy transfer (EnT) to produce 1D2*, and subsequent ultrafast 1D2*-to-A electron transfer (ET) to generate a charge-separated state. This ratcheted process requires charge separation (CS) to occur on a timescale much faster than that for thermalization; CS trapping on A should be on a similar time scale or faster than the 1D1*/D2 Rabi oscillation that would eventually drive relaxation of the coherent 1[D1-D2]* excited state to 1D1*. Fleming‘s group has explored the parameters controlling quantum ratcheting. In a three-state model that neglects the ground electronic state of the initially excited species, efficient forward transport is found to depend on the electronic coupling between 1D1*, D2, and A, the vibronic coupling, and the extent of resonance between the initially populated vibrational level in the excited D and the vibrational states of the intermediate species. The electronic structure of an established ratcheted EnT system (Fig. 2C) was studied by Beratan using TD-DFT. 2DEV and 2DES experiments are in progress to interrogate the modes that control coherence and drive energy ratcheting. Additional theoretical efforts in the Fleming group explore how the resonance between the frequency of a vibrational mode and the energy gap between electronic excitons may be leveraged to induce vibronic mixing between electronic states to drive transport. Principles being demonstrated in these studies could be utilized more generally for the design of synthetic energy-harvesting structures.

Figure 3. (A) Structural views of ZnP2BQ; (B). Excited state population and purity (a measure of entropy) in the bacteriochlorophyll dimer.

Wasielewski has synthesized a porphyrin dimer in which the two PZn are symmetrically arranged relative to a benzoquinone electron acceptor (A) across a rigid triptycene scaffold (ZnP2BQ, Fig. 3A), designed to address the following question: How does vibronic coherence among multiple electron donors (Ds) influence ultrafast ET to a single electron A? Time-resolved and frequency domain coherent multidimensional spectroscopies (CMDS) examine ZnP2BQ in a variety of solvents as well as in frozen glasses (Wasielewski, Fleming), while theory is being developed to describe coherent charge separation in this system (Beratan, Makri). Theoretical studies provide important guidance toward the rational design of molecular structures with tailored function. Path integral calculations are underway to explore the possibilities offered by interference among degenerate pathways and the associated dynamical coherences in the ultrafast ET dynamics (Makri). Results identify significant differences in dynamics resulting from interfering pathways, which can be exploited to achieve targeted outcomes. The direct feedback between theory and experiment (Makri, Beratan, Wasielewski) is a crucial element of this work, and informs subsequent rounds of molecular design.

Photogenerated spin qubit pairs and their associated spin coherence are important in photosynthesis, avian navigation, and quantum information science. Path integral calculations in one-dimensional arrays of interacting spins (Makri) have explored the coherence, purity (which is related to the von Neumann entropy) and entanglement properties of these systems in the presence of dissipative effects from intramolecular vibrations that couple to each spin. This work showed that the purity exhibits nonmonotonic behaviors as a function of time in some regimes (for example in bacteriochlorophyll dimers at room temperature), and a nearly quantitative revival is observed long after populations and coherences have decayed (Fig. 3B). Importantly, the studies pinpoint the contributions of spin-spin and spin-vibration interactions as sources for coherence loss and suggest novel effects that may be used to enhance system performance in the face of vibrationally-induced decoherence.

Wasielewski has shown that ET can be accelerated more than is predicted using classical incoherent ET theory when a rigid molecular electron D interacts with multiple equivalent electron acceptors (Fig. 4). The observed rate enhancement in the anthracene-bis(benzoquinone) (2) is about two times larger than that predicted by the conventional Marcus-Jortner kinetic treatment for two statistically equivalent acceptors, i.e., 2x the rate for (1), suggesting the potential role of quantum coherence and interference in the ET kinetics. The delocalized A electronic state enhances the effective D-A coupling, and, at the same time, it survives in the presence of correlated system−bath fluctuations at low temperatures. Both effects indicate a coherence-dominated ET mechanism, leading to a nonclassical rate acceleration. Beratan performed quantum chemical and dynamical simulations on these molecular systems to investigate the origins of coherence enhanced ET kinetics. This close collaboration aims to establish molecular design principles to control coherent ET kinetics. Using electronic structure analysis and molecular dynamic simulation, a three-state Hamiltonian was built to describe the anthracene-benzoquinone complex, and a realistic spectral density that includes 162 vibrational degrees of freedom was formulated. Electron density evolution was analyzed, and the D-A coherence was probed using a numerically exact tree tensor network method recently developed in Beratan’s lab, revealing that the low temperature rate enhancements arise from the interplay between the superposition state of the two equivalent acceptors and the correlated system−bath fluctuations. Ongoing studies are exploring strategies to sustain vibronic coherence as temperature, D-A coupling, and molecular symmetry are altered. 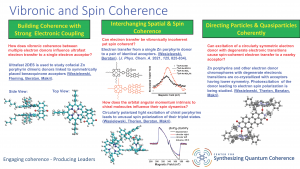 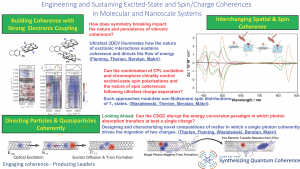 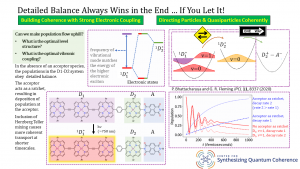 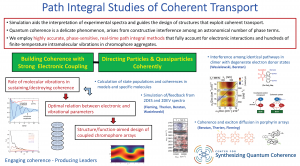